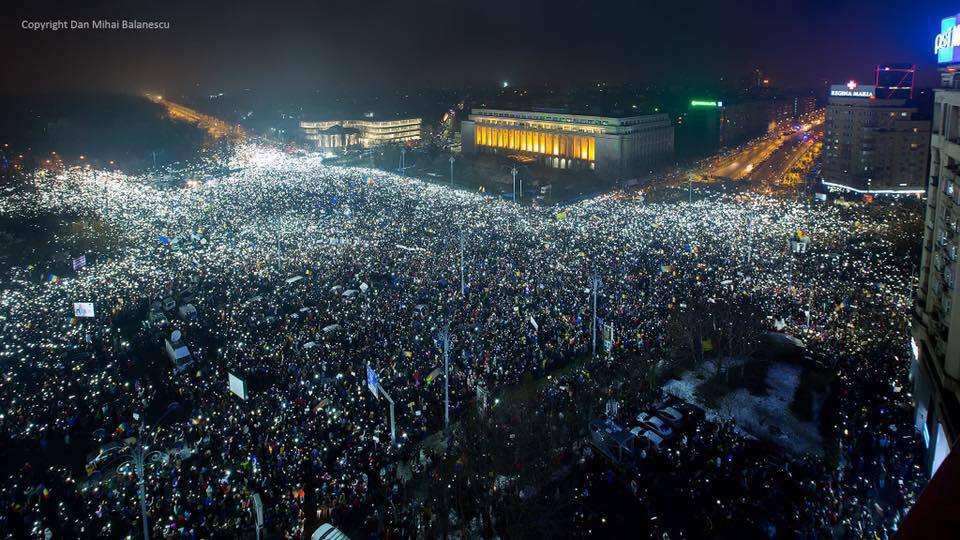 The protest arose in response to a government ordinance decriminalizing abuse of power by government officials and employees.

As of Sunday, backlash to the government’s decree had convinced officials to repeal it. Nonetheless, wary citizens continued their vigil at the square and other sites around the country as the protest marked it’s sixth day. It is described as the largest protest in Romania since 1989, when the country saw the end of communism.

Sebastian Burduja, president of the New Civic Action Party, described the activists as orderly and goal-driven. “I witnessed firsthand the positive energy, decency, and sense of civic duty that spring from these demonstrations,” he said, “people are firm and exceptionally resilient in the face of below-zero temperatures, but also extremely peaceful.”

When some “hooligans” started needling the police in an attempt to get a reaction, he said, the crowd stopped them, chanting “say no to violence” in Romanian.

The protesters packed the Square, calling for the resignation of the Prime Minister and other government officials.

Announcing his intent Saturday to repeal the decree, the prime minister called for unity, the news agency reported. “I do not want to divide Romania,” Prime Minister Sorin Grindeanu said,  “Romania cannot be split into two. Right now, Romania seems broken in two,”

In addition to the crowd in Bucharest, another 40,000 people were reported protesting in Cluj-Napoca, and up to 100,000 people combined, Digi24 reported, in other cities across the country.

“Beyond all the disappointment with politicians, however, the Romanian protests are about principles and renewed hope in a better future. People are standing up in tremendous numbers for justice, democracy, and the rule of law,” Burduja said.